There is a kind of brain fog that feels unique to early parenthood, and yet I know it isn’t. It’s the same sort of disorienting haze that envelopes anyone who finds their time is not really their own, but rather has been sacrificed to another purpose, voluntarily or otherwise. You lose pieces of yourself, little by little, often unnoticed, until one day you begin to emerge from your experience without the faintest idea of who you are, or even who you used to be.

I had this realization when I first got Covid last year, and it’s been gnawing at me a ton lately.

Ever since having knee surgery, I’ve gained weight to the point where I’m almost the biggest I’ve ever been.

My daily routine is just not at all what I want to do. What’s a day in my life, you asked?

I wake up around 6a and immediately grab my phone and doom scroll. Then I wake up and get breakfast prepped for my wife and kids, then I work.

I work from 6:30a until 5p, only taking occasional breaks to interact gruffly with my family and coworkers and stuff unhealthy junk into my body.

The unhealthy stuff has gotten worse over the last few months. I hadn’t had pop in nearly 2 decades. Now I find myself grabbing a Sprite from time to time. I also eat as much sugar as I can bear in as many forms as I can.

After work, I come home and if I’m lucky, I chat with my wife and eat some dinner, then I play with the kids. If I’m not luck and had a particularly tough day (which is the norm as of late), I come home and sit on my phone until it’s time to put the kids to bed.

I do like getting the kids down, it’s a routine I rather enjoy. Vitamins, pajamas, an episode of something, a few books, then tucked in.

After that, I sit on my phone while the tv blares something I’m only half paying attention to in the background. I eat more sugar. Eventually, I move to bed where I continue on my phone until pass out from exhaustion.

A night filled with awkward dreams and uncomfortable sleep greets me at this point (try sleeping with a heavy brace that keeps your knee locked straight). Then, I get to wake up and do it all again.

That routine sucks. It’s no wonder I’m itching for a change. I want to spend meaningful time with my kids and wife. I want to get involved with activities that bring me joy, like working out, tinkering with hardware, or programming new websites. I want to spend time hanging out with friends and folks who give me energy.

I’m heading out of town for an extended business trip here soon. I think I’m gonna budget my life a bit better while I’m there, and when I return, I’m gonna make some changes.

Because life has a way of making you forget who you are.

And when I start to remember the things that used to make me happy, it can only make life better for me and those who have to put up with me.

Human nature is to put boundaries around the loss, so we know it’s something that happens to other people. We say that they’re in a better place or to just remember the good times, because if we spoke the truth – that tragedy comes for us all, that sometimes life is random and cruel and painful and beyond comprehension – I mean, how would we even function?

Death has been on my mind a lot lately. Both of my kids continually ask about it, and a coworker of mine is grieving a very recent death in their family.

This is the conclusion I inevitably come to: death does come for us all, randomly and painfully and mercilessly.

The only way I’ve found to cope with the concept of death is to be grateful to be born in the first place. What a stroke of luck we have to even be alive.

In the words of Jeff Mangum: “How strange it is to be anything at all.” 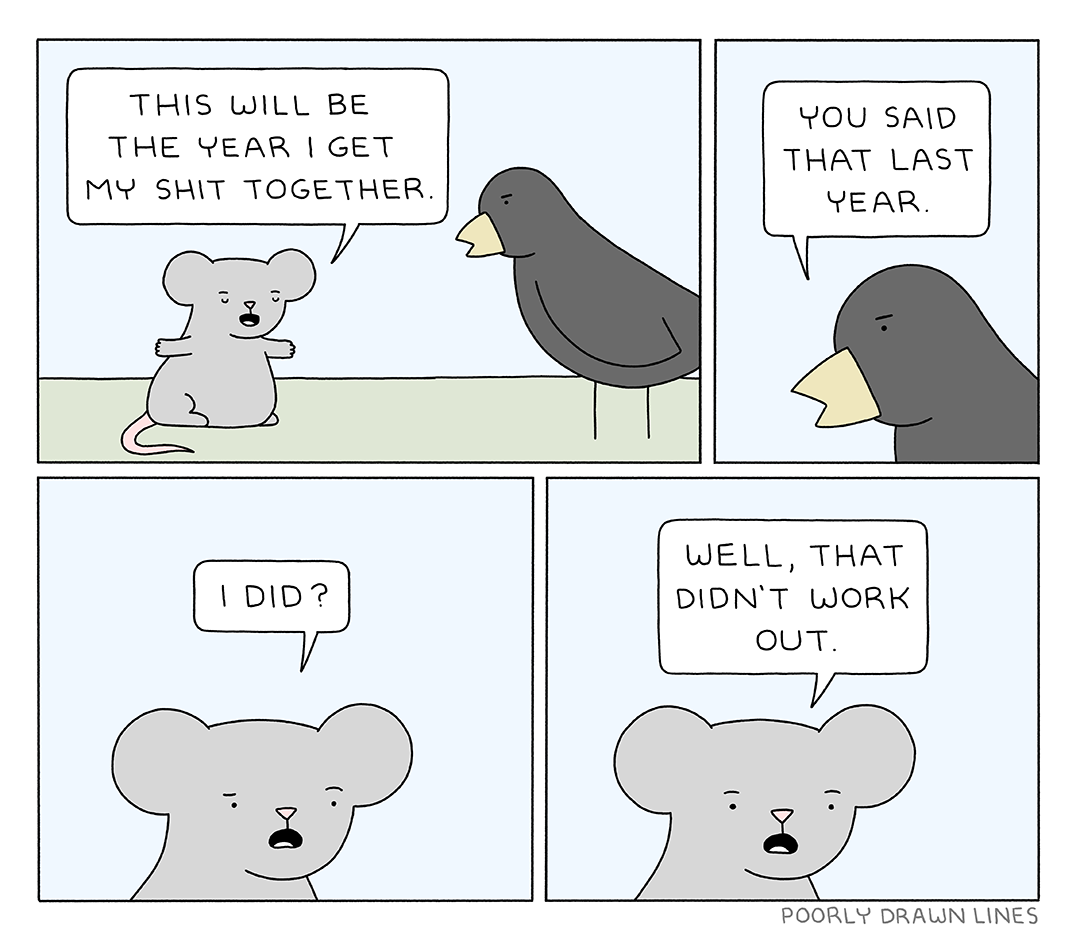 …but this year will be different!

Anytime you try to control or reverse disorder, you introduce tension. This is true on a sociological level, where any attempt to organize people inevitably leads to rebellion. But more relevantly, it’s also true at the individual level, and is particularly poignant in our desire to control time.

This same thought (trying to control disorder) has been going through my head a lot lately, but I’ve only ever applied it to political discourse or workplace drama. I’ve never once thought to apply it to time.

Burnout is often associated with working too much, but the real reason it happens is because you have defined yourself by what you produce. It’s not just the exertion of energy spent during your working hours, but the exertion of thought spent during the time you’re not working. It lives in the moment where you’re physically with your family, but mentally planning out what you need to do next. Or when you keep looking at the time when you should just be enjoying lunch.

Again, as a recovering entrepreneur, I’m only now becoming aware of how awful my compulsive need to check in on my team had become.

I’m striving in 2023 to better utilize time as an ally, and to build back the healthy habits that I’ve surrendered in the name of maximum productivity and profitability. Those habits include things I actually used to do (5K run or 2.5mi walk every morning, journaling) and things I keep telling myself I want to do (yoga, biking, playing with my kids, dating my wife).

I wanted to recapture the excitement I used to feel over finding out something that not very many people knew — the satisfaction I used to get from wrestling with things, spinning them around and trying to see the different angles. Before it all got buried beneath analytics and followers and “impact” and gimmicks and waiting for the next round of layoffs.

Not knowing how to say any of this out loud, I didn’t tell anyone. I just slowed down — backed off of pitching editors, stopped picking up late night phone calls from sources. I shifted my focus to editing other people’s work, which is less stressful and also pays better. I wrote some personal essays and took some college classes and sat on my kitchen floor trying to imagine what my Twitter bio would say if it didn’t start with “Freelance journalist.”

When I left JMG in March, this exact sort of identity crisis was a huge marble that wouldn’t stop rattling around my brain.

In the past nine months, I’ve become more comfortable letting go of my identities. Besides, what good are identities anyway?

My third grade teacher used to make us listen to a song every day that had a chorus which said “I can be the best I can be.”

And I think at this point in my life, that’s all I need to be.

The ultimate lesson, then, is to remind yourself that no, your current life is not normal.

It’s super weird and super specific, and you can completely change the damned thing in as many ways as you like and you absolutely will adapt and be able to handle it.

Coscarelli told me that, over the years, many wonderful and generous women had come to her clinic, and some of them had died very quickly. Yikes. I had to come clean: Not only was I un-wonderful. I was also kind of a bitch.

God love her, she came through with exactly what I needed to hear: “I’ve seen some of the biggest bitches come in, and they’re still alive.”

And that, my friends, was when I had my very first positive thought. I imagined all those bitches getting healthy, and I said to myself, I think I’m going to beat this thing.

This whole article is good advice for those of us who have never had cancer.

Hell, this is good advice for life in general. Everyone deals with different situations in life, and how they persevere is just as unique.

It’s more important to learn how to show up for those you care about than it is to push your opinions on them.

We arduously convince young children to believe in Santa, and they do. Testimony dictates religious beliefs, too. For example, psychologist Rebekah Richert has found that if you frame a fantastical story as a religious story, children raised in religious households will believe it. If you don't frame it religiously, they'll call your bluff.

When we get to college, however, cultural testimony changes. An analytical, scientific view reigns, and there's little room for God. We staggered home from parties pontificating on the pointless evil of Western religion. We made friends by cynically confessing our doubt. College is "very likely to challenge the more conservative belief systems we have in our brains," Grafman says. It deflates our adolescent faith.

Montreal averages almost 210 cm (82 inches) of snow every winter. We get less sunlight, 20% more precipitation, and have winter temperatures that are on average 4° C (7° F) colder than Toronto. And yet soon after a moderate snowfall, Montreal is bustling: sidewalks, bike paths, and streets are all cleared in a snow removal effort (le déneigement, en français) that is choreographed and masterful.

Add another item to my bucket list: I’d love to see these pits where they drop the snow.

Don't tell me you haven't wondered this yourself. What a clever piece of technology that we all take for granted.